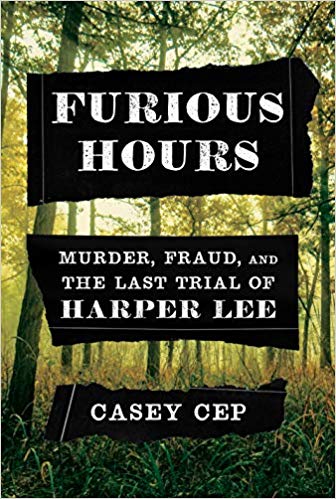 The Rev. Willie Maxwell is a preacher who is well known for being accused and/or suspicioned of killing five of his family members for insurance money.  But Willie has a good lawyer (or else he’s very good at casting voodoo spells which some people believe) and he’s always gotten off scot-free.  That was so until the death of his stepdaughter when the girl’s uncle, Robert Lewis Brown, shot and killed the Reverend at the girl’s funeral.  Now Brown must face his own trial for murder and unbelievably, he is represented by the same attorney who represented the Reverend for so many years – Tom Radney.

It had been many years since Harper Lee wrote “To Kill a Mockingbird”.  Readers and publishers had been anxiously awaiting a new book from her.  She needed something special to bring her writing talent to life again.  When she heard of the stories surrounding the Rev. Willie Maxwell, she believed that this was the book she had been waiting to write and she traveled to Alabama to gather research.  She wasn’t new at true crime research as she had been with Truman Capote when he researched and conducted interviews for his book “In Cold Blood”.  Lee was never happy with all the untruths contained in Capote’s book and was determined that her book on the Reverend would be more factual.  And yet, whatever happened to that book she referred to as “The Reverend”?

This is a top-of-the-line biographical work.  I was completely immersed in this story of crime and greed.  I’ve always been fascinated by both Harper Lee and Truman Capote though had never read anything about Lee’s involvement in the Willie Maxwell story.  Even without Lee’s involvement, Maxwell’s story and all the rumors and superstitions surrounding it make a very compelling, bewitching tale.  The addition of Harper Lee in the mix is luscious icing on an already amazing cake.  The author does a stunning job of telling the facts of this story.  It’s one of those situations where truth is stranger than fiction.

I’m blown away that this is the debut work of this author.  She has rendered this story both in a riveting way while keeping it all very factual and true to life.  Not only does she relay the facts of the immediate story of Maxwell and Lee but also includes a history of how life insurance began, the ongoing belief in voodoo in the south, how justice doesn’t always triumph in a courtroom and the workings of artistic creativity.  I had a very hard time putting this one down and will long remember it.

This book was given to me by the publisher in return for an honest review.

3 thoughts on “A most impressive biography”